When planning trips, I try to pick out things to see and do that appeal to the entire family, which is challenging considering the variety of interests held by my three kids and my husband’s disinclination towards travel. So, while researching things to do in Paris, I felt I hit the jackpot when I learned that Paris is home to France’s Musée de l’Armée Invalides. A museum dedicated to military history, armor, weapons, and art was sure to appeal to all of us. Who wouldn’t get excited about a courtyard lined with cannons and display cases filled with swords? It turns out I was right; the museum was the perfect place to spend a day in Paris. 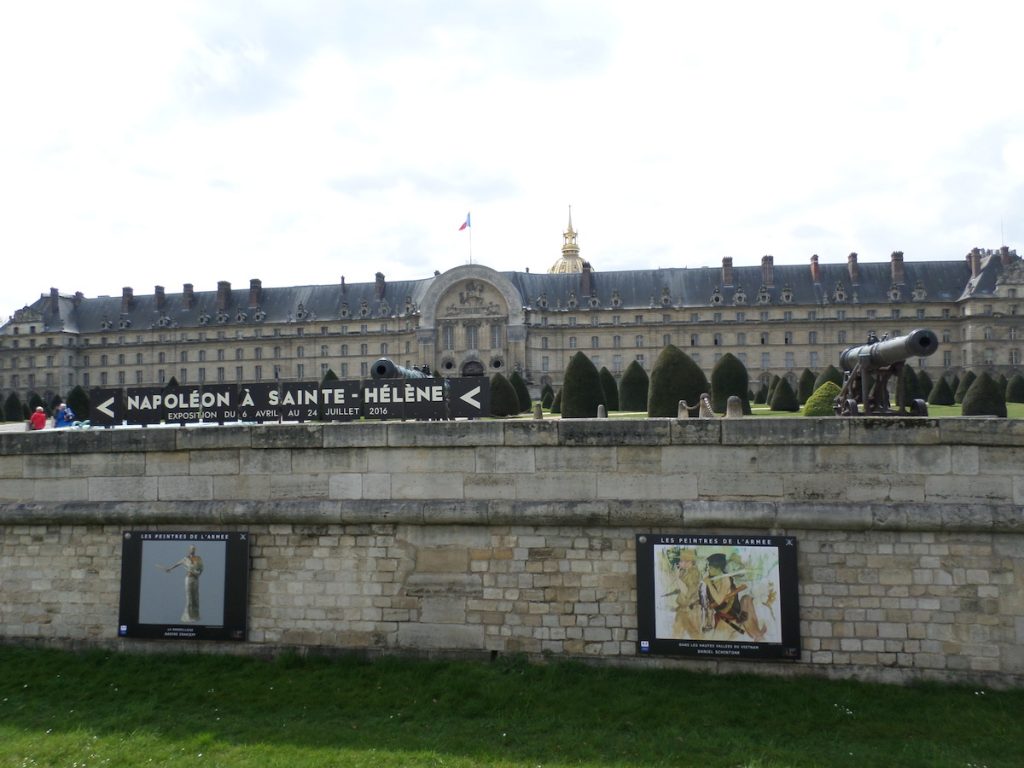 The museum sits on the same grounds as the Hôtel Royal des Invalides, a home and hospital for veterans. Louis XIV, who worried about the welfare of soldiers that served him faithfully, commissioned the building. The residence was completed in 1676 and still serves as a hospital and care facility for wounded and disabled war veterans. An appealing part of visiting the museum is the chance to cross paths with a veteran who might be willing to share a few personal stories while strolling around the courtyard.

In addition to the Hôtel Royal des Invalides, the Dôme des Invalides and a veterans’ chapel were also built during the seventeenth century. The Dôme des Invalides was a royal chapel connected to the veterans’ chapel that allowed the king to celebrate religious services at the same time as his soldiers while maintaining separate areas as was the custom of the day. Decorations within the chapel honor Louis XIV and his armies. Visitors can go into the veterans’ chapel during certain hours, but museum staff does ask us to remember that the chapel is still in use as a religious space and respect should be shown. 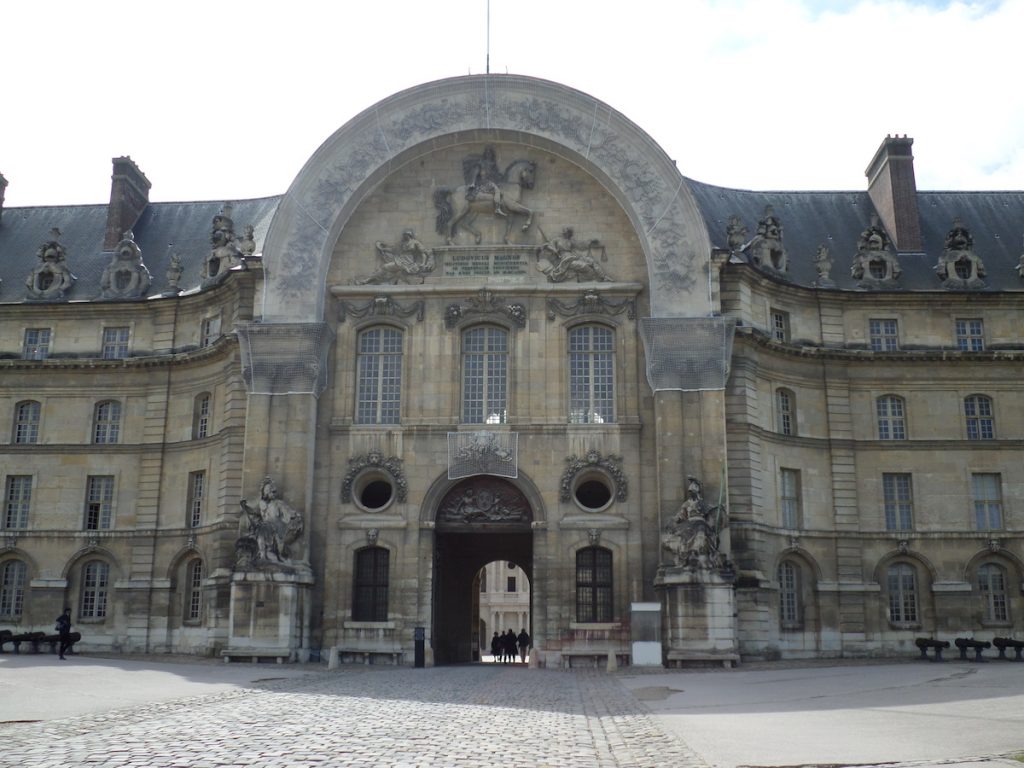 The Dôme was reimagined into a military pantheon referred to as the Temple de Mars during the early nineteenth century. Napoleon Bonaparte moved the remains of some of his favored commanders to the Dôme where he constructed monumental tombs. Eventually, Napoleon I was also laid to rest in the Dôme. He passed away in 1821 on the island of St. Helena, where he was forced to live since 1815. In 1840, King Louis-Philippe took it upon himself to return Napoleon’s body to France. It took twenty years to construct the monument and for his remains to be placed in a magnificently sculpted tomb surrounded. Huge statues depicting twelve “Victories,” or references to great military accomplishments, circle the tomb and ten reliefs reflect major political and social achievements. Overlooking everything is a statue of Emperor Napoleon I. The grandeur of the monument mirrors the importance of Napoleon in France’s history and serves as one of the museum’s most famous attractions. 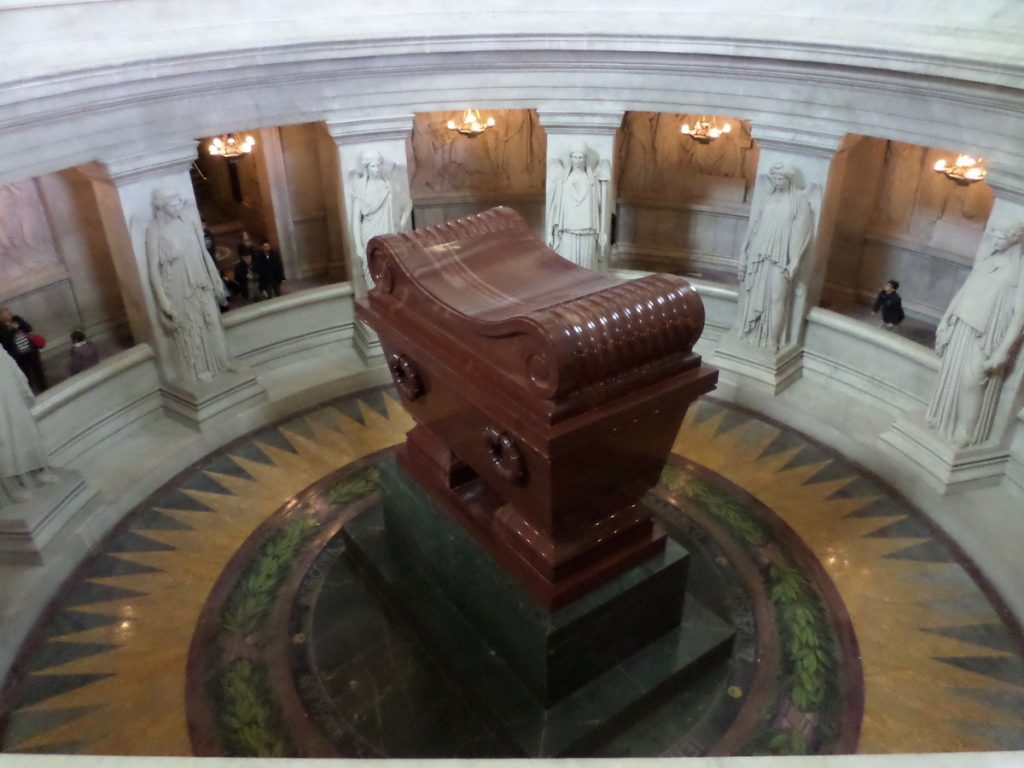 The museum itself was created in 1905 when items from the Artillery Museum and the Army History Museum merged. The antique arms and armor section of the museum includes collections from French kings’ arms stores. The items on display cover the Middle Ages up to 1643. It would be very easy for the display to become rows and rows of helmets, swords, and suits of armor that blend together, but the museum manages to keep visitors’ interest by connecting many of the items to specific people and moments in history. Knowing that a king wore a certain helmet on a battlefield or understanding that a hole in a piece of armor is from a test shot fired at it to evaluate its strength helps bring life to the inanimate objects. The information provides the visitor with something to imagine, which my family was happy to do during our visit. The “Lion’s Armour,” thought to have been used by Francis I, and “L’armure du dauphin,” or the Dolphin’s armor, which belonged to Henry II, are counted among the collections most prized pieces. 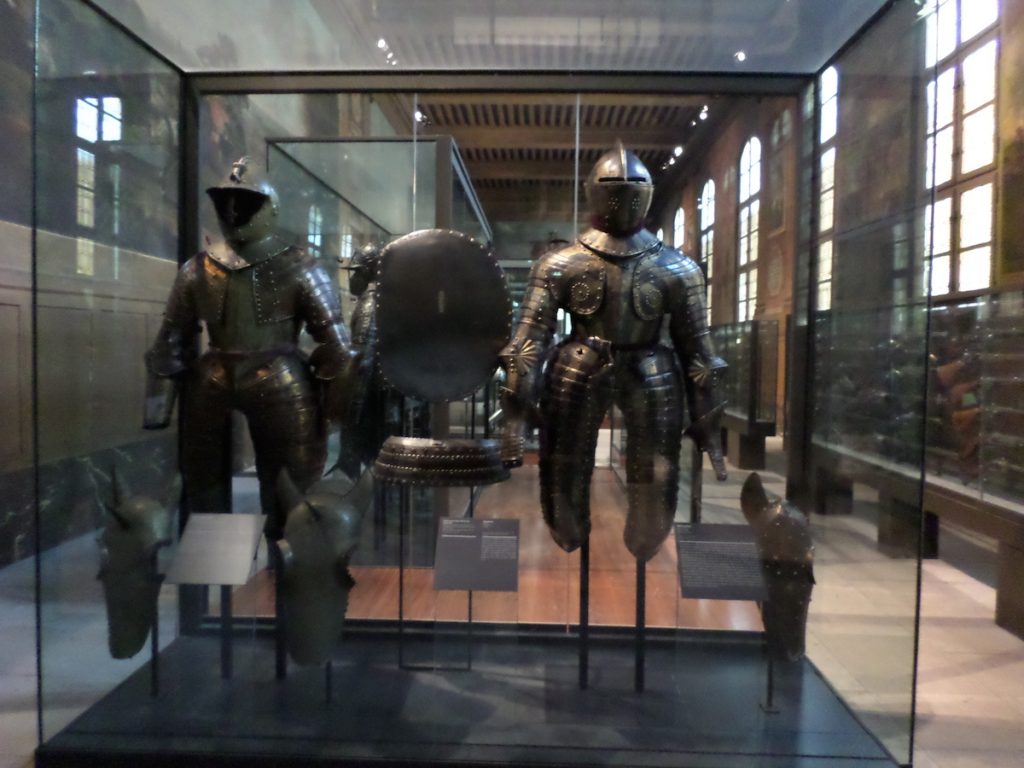 Besides the antique arms and armor section, visitors can marvel at equipment, uniforms, and personal items used by generals and soldiers. The collections are separated by date and major military engagements. So, one area covers 1643 to 1871, or from the reign of Louis XIV to Napoleon III. Another part of the museum focuses on 1871 to 1945 with the two world wars receiving a lot of attention. In all, the Musée de l’Armée Invalides comprises one of the largest and most impressive military and war-related collections in the world.

The Musée de l’Armée Invalides is open daily except January 1st, May 1st, and December 25th. From The first of April through the end of October, opening hours are 10:00 AM to 6:00 PM. Hours are 10:00 AM to 5:00 PM from November 1st to March 31st. On Tuesdays from April to September, the closing time is extended to 9:00 PM. The museum is located at 129 rue de Grenelle, 75007 Paris. It is easily reached from the La Tour-Maubourg and Varenne metro stations.

The museum offers free admission to visitors under 18, foreign soldiers in uniform, Pass Education holders, and several other special groups. Paris Museum Pass holders can also visit for free.   Information about how to purchase a Paris Museum Pass and a list of participating museums can be found at www.parismuseumpass.com. Full price tickets to the museum are available for €11; €9 reduced tickets are available daily from 5:00 PM to closing in the summer and from 4:00 PM to closing in the winter. Groups of ten or more qualify for the reduced price and can make arrangements by calling +33 (0) 825 05 44 05.