The charming city of Colmar 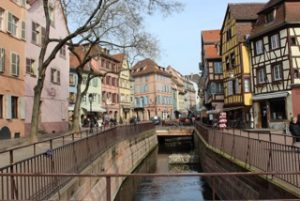 Recently I went with a small group of travelers to discover the charming city of Colmar, France. A day trip from Stuttgart we decided we would hit the road a little early to avoid traffic jams “STAUs” and construction. Much to our delight, the trip took us just over two hours. No, we didn’t speed…too much. Having heard the chatter about this delightful Alsatian town, we were intrigued about what we would find. One of the great advantages of being stationed in Germany and the military community is our ability to communicate with each other and share great finds. Colmar is definitely one of those finds. We took this trip on the advice of my friend Heather, who had recently been to check out the markets, water-lined streets, old churches, and cobblestone as far as the eye could see. We were definitely not disappointed. 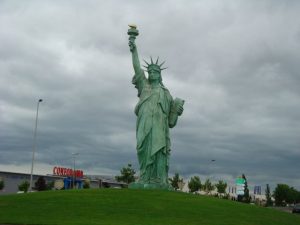 Whether you are traveling in Germany or around Europe, parking can always be a concern in the bigger cities. If you have not downloaded the Parkopedia app yet, you are missing out. This little gem will save you hours of heated discussion with your spouse on where to park. With the help of the app we found parking garages that dot the city. The most central garage was the Parking Garage Place De La Mairie. This is the closest to the information center and also located on the rue De Ribeauville. The information attendant was wonderful and spoke great English. Although I am practicing my Deutsch, my high school French teacher would cringe if she could hear me now. Inside the center, they have a walking tour map that is critical in making the most of your day. It is also downloadable on their website.

One of the biggest thrills of discovering Colmar is our American connection. As soon as we entered the town, we came to a roundabout with a miniature version of the Statue of Liberty. We had uncovered the birthplace of Frédéric Auguste Bartholdi, the sculptor of one of our most famous statues. What a treat!

If you begin the walking tour at the information center and follow the map, you can grab a sweet pastry and coffee, there are several cafes on rue Kléber near the Unterlinden Museum. Following the map, it led us to the Dominican church and Saint Martin’s Collegiate church. Both churches were built-in the 1200’s in Colmar and both in the Baroque style. However, the Dominicans were driven out temporarily in 1330. The Dominican church was reconstructed in the 80’s and 90’s and though Saint Martin’s was still under reconstruction, we were permitted to come in, donate a little to the church and take pictures of the murals, paintings, and architecture.

Our next stop was in the Tannery section of Colmar, which led us to the Schwendi Fountain. Another Bartholdi statue, this one was dedicated to a man who was a diplomat, officer, and statesman during the 1500’s. This part of town has many storefronts that are delightful and filled with local and regional crafts. There are also tourist shops where you can find commercial Alsatian laces and fabrics; those are nice for gifts to send back home. The Alsatian symbol is a red-checkered heart; you can find this on most linens in the area. 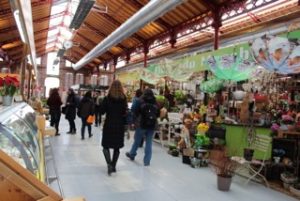 Definitely a highlight for our whole group was the understated, yet amazing covered market located in the center of town. If it was not shown on the street map, we might not have found it. It could have been because we were tourists in the off-season but I chose to think it is because we were a good-looking group of ladies. Whatever the reason, we were greeted by the merchants and restaurant owners with smiles and “Bon jours” at every kiosk in the market making us all re-think our idea of French hospitality. From fish and meats to flowers and cheese, this market had it all. We met an exotic restaurant charmer, Heinrich, who beckoned us to join him for raclette (traditionally a special cheese and ham melted sandwich). I tried one with Roquefort cheese, pears and walnut with a small side salad. It was delicious with my wine spritzer. 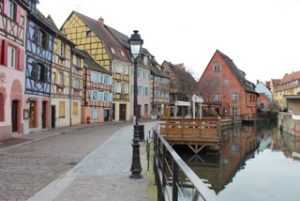 Not to be confused with “Little Italy,” as one of my traveller friends called it, there are no Italian restaurants in this beautiful part of the city. However, there is tasty biscuit maker the “Maison Alsacienne de Biscuiterie, where I loaded up.  In the spring and summer the water streets are lined with flower boxes and bouquets as well as birds of all kind. Also, during warmer weather boat tours cruise around the city and you get to preview the city from a different perspective. 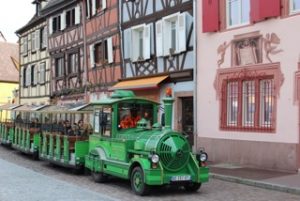 Another way to see the city is the tour buses (these buses loop the city) but be sure to look for the white buses, as they are the English speaking tours. We just enjoyed watching these weave in and out of the narrow French roads. With over 40 sites to see on the walking tour we obviously did not get to see everything on our day trip but Colmar is definitely a  “keeper”. I didn’t mind the walking tour, my FitBit got quite the workout and so did I. I am looking forward to maybe a summer weekend trip to spend a little bit more time in the Alsace. This French, German and English speaking part of France intrigues me and I know there is so much more to discover. 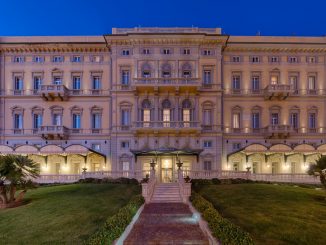 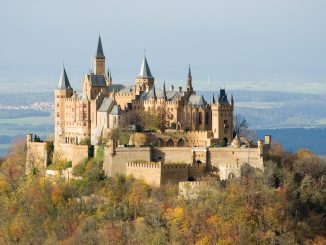 Five Castles to See in Baden-Württemberg